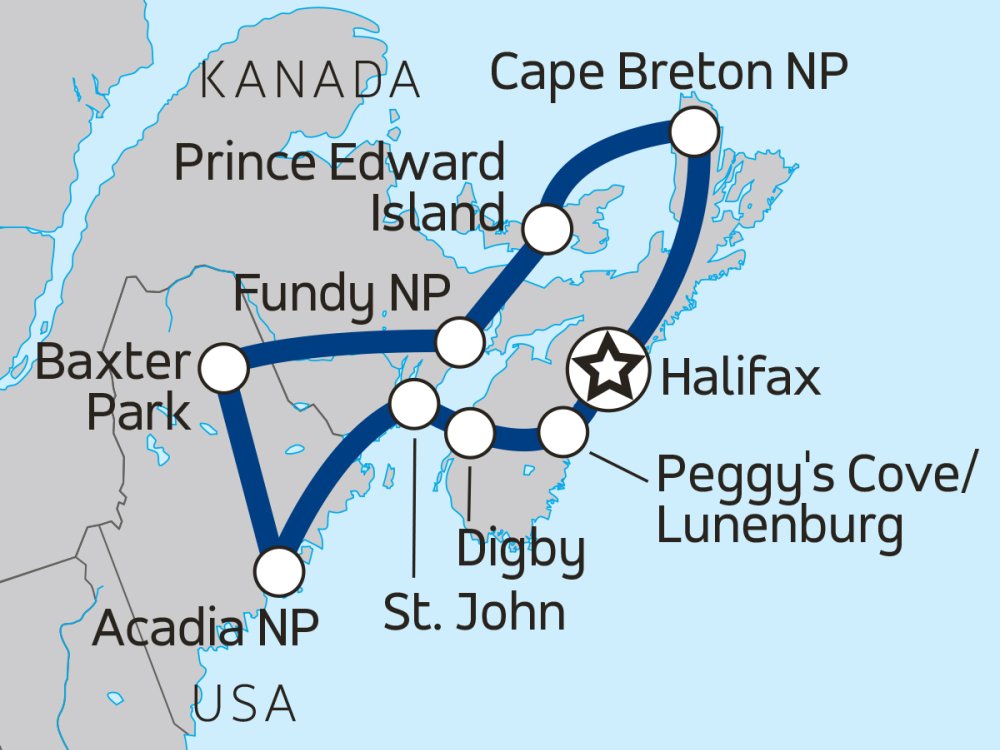 Welcome to Halifax and the provincial capital of Nova Scotia, well-known for its maritime history. With its large natural harbour, Halifax has historically been one of the busiest ports on the eastern seaboard. You are free to arrive at any time today ahead of the welcome meeting at 6pm, where you’ll meet your tour guide and fellow travelling companions.

Should you arrive early, why not visit some of the many parks, museums, landmarks, art galleries and waterfront cafes of Halifax. The Maritime Museum in the Halifax Regional Municipality (HRM) tells the story of the city's seafaring origins whilst the fortress on Citadel Hill with its iconic Town Clock overlooks the modern glass towers of the city, providing that link between the past and the present.

This morning, you drive to the iconic area of Peggy's Cove to see the lighthouse which is always a prominent feature of the area and makes for some excellent holiday pictures. For a different perspective of this iconic sight, your guide will lead you on the Polly’s Cove Trail. Next you travel to the World Heritage listed historic town of Lunenburg. A walk down the streets of Lunenburg is sure to remind you of a journey back to a bygone era with its unique architecture exemplified in the colourful wooden structures that date back to colonial times, reflecting the town’s position as a seaport and a centre for shipbuilding.

Head to the western part of the Nova Scotia peninsula to the lush Annapolis Valley for a hike and wine tasting experience in Nova Scotia’s famous wine country. You will enjoy an overnight stay in Digby – a charming harbour town and settlement of the United Empire Loyalists.

Today you will stop at coastal Fundy National Park in the province of New Brunswick. The Bay of Fundy is known to have the highest range in tide levels of anywhere in the world with an average variance of 47.5ft and an extreme variance of an amazing 53.3ft.

The main features of this park include the seaside habitats and the highland Acadian forests, which you have time to explore, as well as the beautiful waterfalls. In the afternoon, your guide leads you on the Coppermine Trail which delivers you to an old copper mine site. Beginning at the car park, your hike meanders through a field and then through predominantly spruce woodland, climbing uphill and further into the woods. You’ll traverse over several streams on wooden bridges until finding the remnants of the old copper mine along with interpretative signs. This trail offers great views across the bay.

This morning, you visit the beautiful Hopewell Rocks where these incredible rock formations make for some amazing photographs. It may be possible to walk (1.5 kms) to Demoiselle Beach, a picturesque and quiet sandy cove. Your next stop is Prince Edward Island; the smallest of all the Canadian provinces with a total population of 141,000. Often referred to as 'PEI', the province actually consists of one major island called Prince Edward Island, as well as a collection of smaller islands. It's also referred to as the 'Birthplace of Confederation', as the Charlottetown Conference held in 1864 was one of a few events that established the framework which led the British colonies to confederation in 1867.

Prince Edward Island was the childhood home of author Lucy Maud Montgomery, whose best-selling novel, 'Anne of Green Gables' (published in 1908), was set here. It's possible to join a tour of Green Gables House, as well as stroll around on the Balsom Woods and Haunted Hollows trails that feature in the book.

On day six, you explore some of Prince Edward Island National Park on foot, following its beautiful sandy beaches and landmarks, starting from the Dalvay-by-the-sea historical mansion. Experience the sand dunes, beaches, salt marshes, forest and more. The distance is variable but will be approximately 6.2 miles (10 kms) with a low elevation and suitable for most.

From Prince Edward Island, it’s a short ferry ride to Caribou Provincial Park, before driving towards the impressive headlands of Cape Breton Highlands National Park in the province of Nova Scotia - Canada's second smallest province. Sheer cliffs rising from the sea at the base of the coastal range help to form the spectacular coastline. Spend this evening in picturesque Baddeck, the gateway to the Highlands.

During your time on PEI, you’ll hike beside the many forested lakes and to the top of the various rugged peaks for outstanding views or take to the sea for some fantastic kayaking along the remote and beautiful coastline. Consisting of the Acadian and boreal forests, this park is home to various species of wildlife such as Black Bear, coyote and moose. If you're lucky you may see Bald Eagles circling overhead or perched high up in the trees.

Take a break from walking with an exhilarating afternoon spent whale watching. This unique experience provides you with the perfect opportunity to discover the beauty of northern Cape Breton and eclectic mix of marine life near the coastlines. By using smaller Zodiacs, this allow us to blast along the rugged shores in search of whales, dolphins, seals, leatherback turtles, puffins and eagles.

On day 9, we enjoy a hike along the spectacular Skyline Trail on the Cabot Trail, Cape Breton’s scenic byway, where you can get an eagle's view of the Cabot Trail as it winds its way down the mountain, with the vehicles so far away, they look like toy cars. Catch glimpses of whales on the Gulf of St. Lawrence from the viewing decks. Moose, bald eagles, bears and numerous boreal birds live in this habitat.

For both nights you will spend an overnight stay in the fishing town of Cheticamp, that’s rich with Acadian culture. Here, you’ll enjoy a maritime special – lobster boil dinner on the beach.

Today you will make your way back towards Halifax where your tour ends at the hotel upon arrival. Your guide will stop at points of intertest along the way. 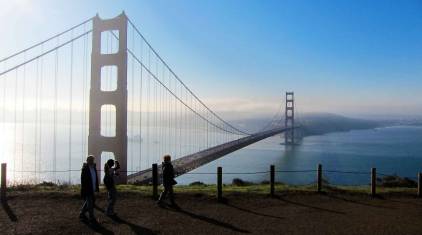 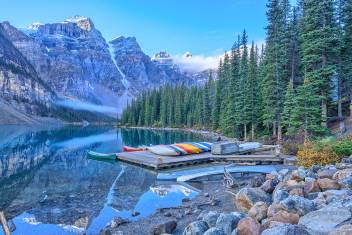 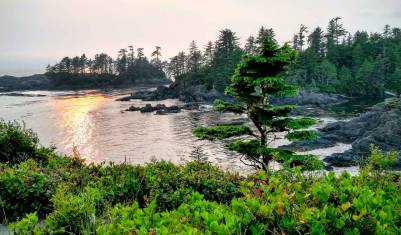