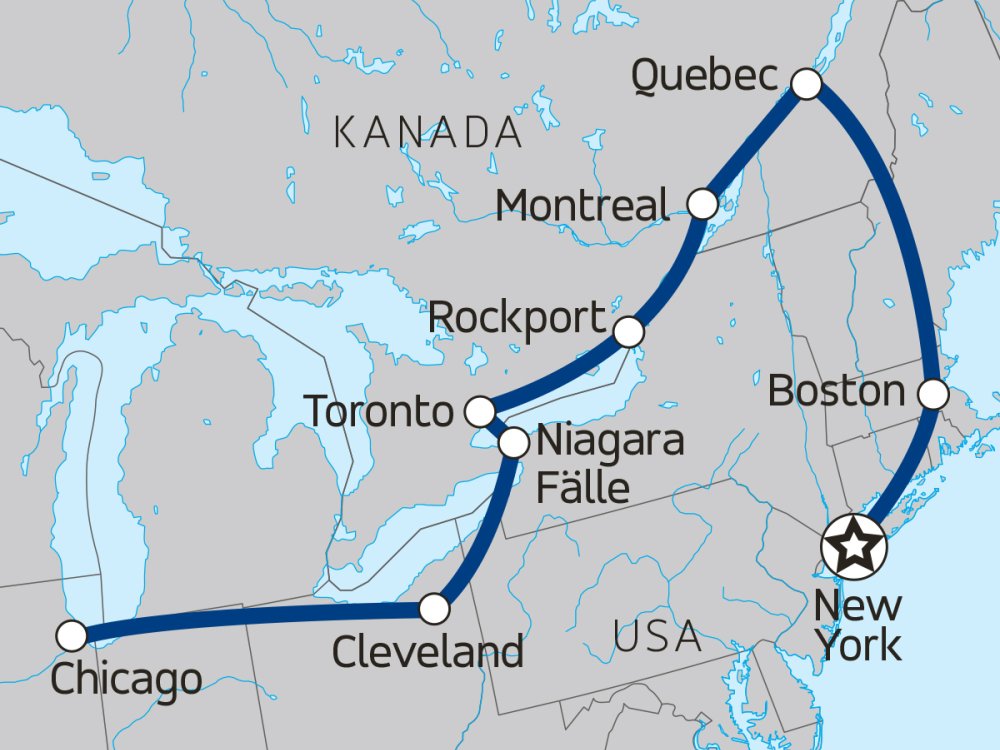 The dizzying city of New York is home to a whopping 8 million stories, and from the minute you meet up with your Contiki crew, you’ll have your own to add to the mix. Today we make for Boston, stopping by New Haven, Connecticut on the way - home to Yale University, known its thriving student culture.

Achingly cool Boston is a delectable mix of history, hipsters and – thanks to the world-famous Red Sox - baseball. Spend the afternoon with your Trip Manager getting acquainted with the city’s core spots and distinct Irish flavour, then come night get friendly with the team over an included dinner and boogy round town.

Boston is steeped in history, so weave your way through the 18th century today on the Freedom Trail. This red-brick path winds past a plethora of sites integral to the revolution, and is guaranteed to inspire your inner rebel. Visit Harvard University (yes, the very same) and get a tour with one of the students. This hilarious look at student life will bring out the LOLs. Take well-deserved coffee breaks at groovy cafes, have a snooze in one of the nine parks that comprise the city’s “Emerald Necklace” and reward yourself with a mouthwatering seafood feast.

With the luck of the Irish, we pack our bags without leaving anything behind and make for Quebec via the wilds of Maine. Whizzing by jaw-dropping scenery and spotting the occasional moose out the window is sure to give you a second wind before we cross the border to Canada.

Quebec’s capital – Canada's Paris – is the only walled city in North America, and once you cop an eyeful of its beauty, you’ll see why they wanted to lock it away. We’ll pull in late today, and tonight you're welcome to take a traipse through town and sample the local watering holes.

With its cobbled streets and ancient stone houses, Quebec City’s UNESCO World-Heritage-listed old town is an open-air museum. After a history lesson with a Local Guide, get out and explore more of what the region has to offer: its vibrant art scene, Parisian-style eateries and quaint river boardwalk. If your tastebuds are feeling adventurous, try munching on duckling with maple syrup – a local delicacy. What else? You could check out the Chateau Frontenac - this red brick building built in 1983 is a landmark the city is definetely proud of. Champagne anyone? The city also boasts some pretty cool nightlife, so lets get out there and boozie, French style.

Enthaltene Aktivitäten:
Stroll Quebec on a walking tour
Explore the only walled city in North America

Together, we’ll take a spin around Montreal’s Old Port and quays before driving up to Mt Royal, which offers sensational views of the city that will leave your head reeling. Back on sea level, we’ll familiarise ourselves with a few signature sites. If you’re hungering for an adrenaline rush this afternoon, jump in a jet boat and get wet in the rapids of the St Lawrence River, or perhaps just take a wander around time trying out your best high school French.

Today is all yours - soak up as much of Montreal’s creative juices and infectious joie de vivre as you can take. Add some cutting-edge threads to your wardrobe at The Main, munch your way through various countries at Jean-Talon market and dance the night away at a jazz bar downtown or in the Latin Quarter. It would be rude not to grab a serving of poutine on the way home, wouldn’t it?

Still bopping along to the sax from the night before, we bid farewell Montreal.

These 1000 islands are as pretty as a picture and a great way to relax and take in the views before we hit Rockport city. On our stop, you'll have chance to board a boat and float your way along the water for an hour of bliss. These islands are dotted with historic buildings and castles. Back on land we make our way further into Canadian territory, with Toronto in our sights.

Welcome to Toronto, the largest city in Canada. Your Trip Manager will fill you in on the hot spots of this fabulous city soon after we arrive, and will then give you the afternoon off to find your niche in its cosmopolitan melting pot.

It’s time to wash away the city grit at what is undoubtedly the best-known waterfall on the planet: Niagara Falls.

You can’t get much wetter than at the world’s ninth-largest waterfall. Experience Niagara Falls’ surging power first-hand on the Niagara Cruise boat by getting right up to its thundering base, then soar above the action in a chopper or just take in the scene from the safety of a viewing platform. And don’t worry – the ponchos are our treat.

Later today we head back to Toronto where we will spend the night.

Toronto is another one of Canada's mulit-cultural hotspots. Maybe catch a baseball game, Head to the of the CN Tower, visit Gallery 44 or Toronto Park for people watching. Tonight, feel the global vibe of this city's nightlife.

We leave Toronto behind us and continue on back across the border into the US and Cleveland, home to the Rock and Roll Hall of Fame. What was once a workingman's town has now had a complete musical make over and cultural re-awakening. The Rock and Roll Hall of Fame is it’s most popular attraction with memorabilia like Janis Joplin’s Porsche, Jimi Hendrix’s hand written lyrics and Ray Charles’ sunglasses. Even if you aren’t a music head this place will inspire you. Tonight we head out to see just what all the Cleveland fuss is about, if there's a game on you could head to the Baseball, or hit up the the town for a taste of the nightlife.

Departing Cleveland today we'll head through America's Midwest as we move on towards Chicago, known as the ‘windy city’. Next up, the Great Lakes and Chicago. Fusing the cutting-edge and the traditional, Chicago serves up innovative architecture and all-American sports, as well as an arts scene that pushes the boundaries yet also keeps to its roots. There is plenty to do, so we'll start by seeing the city sights as we tour the city. Tonight, we focus on the authentic and raw theatrical nature of the back room blues clubs you’ll find hidden throughout the city.

Head to Navy Pier for great city views, bike around town for a street level perspective, jump on an architectural cruise to further understand the city’s skyline, scoff down a Chicago style street hot dog or even see the White Sox or the Cubs play in a huge stadium game. You can't leave Chi -town with sampling their famous deep-dish pizza - come hungry! What. A. Day.

It’s time to say goodbye to your new friends in the Windy City. Swap social deets and hug it out, no doubt with plans for a reunion somewhere exotic already well and truly underway.