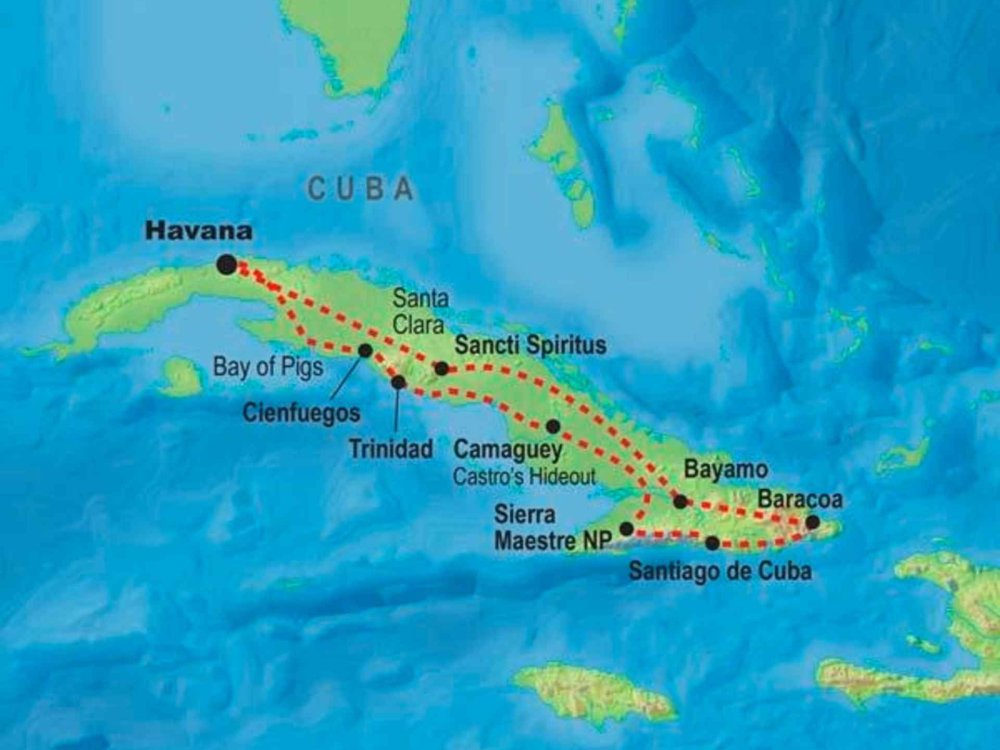 Bitte beachten Sie, dass sich die angegebenen Preise/Aktivitäten jederzeit ändern können.
Day 1: Havana
You are free to arrive at any time today and make your way to the hotel. You have the rest of the day to explore Havana or rest up after your flight as you'll discover the jewels of both old and new Havana at the end of the tour. Your welcome meeting will be at 08:30 hrs tomorrow morning.

Day 2: Santa Clara - Sancti  Spiritus
After your welcome meeting, enjoy a tour of Havana including a stop at Revolution Square and the Capitolio Building. Depart for Santa Clara, stopping for lunch en route. Santa Clara is the site of the last battle of the Cuban revolution. In December 1958, Che Guevara and his troops ambushed an armoured train carrying arms to Santiago de Cuba and this was a major turning point in the revolution. Visit the train museum and Mausoleum of Che Guevara and his comrades who died in Bolivia. The museum attached to the mausoleum has many of his former belongings and is a fascinating insight into one of the 20th Centuries most revered icons. After visiting Santa Clara, you drive on to Sancti Spiritus, where you stay the night.

Day 3: Bayamo
Today is a long driving day as you head to Bayamo in the south of the island. We pass through agricultural towns and sugar cane plantations, learning about the importance of sugar in Cuba's history. You take some time out for stop in Camaguey, Cuba's fourth largest city, to break up the journey and enjoy some delicious local food.

Day  4-5:  Baracoa
Leave Holguin and drive to the beautiful Playa Maguana Beach, to spend a few hours relaxing or swimming in the clear waters of the Atlantic Ocean. Stop for lunch at a beachside cafe before continuing to Baracoa. Founded in 1512, Baracoa was the first Spanish settlement and served as the capital for three years. It's location on the easternmost tip of the island left it open to attacks from pirates, smugglers and the English, so three forts were constructed in the 18th Century for protection. Baracoa has only been accessible by road since the 1960's and this has left it largely off the tourist route. Surrounding the quaint town are lush, tropical mountains and golden sandy beaches. This area is renowned for cocoa growing and chocolate production. The Malecon on the northeast side of the town is known as the Caribbean's first ocean drive. There's still a strong Indian influence here and the El Yunque Mountain, (the anvil shaped mountain described by Christopher Columbus in his diaries) used to be the site of various aboriginal communities. Enjoy an included boat trip on the River Tao or opt to hike nearby El Yungue Mountain.

Day 6-7: Santiago de Cuba
After breakfast you depart Baracoa for Santiago de Cuba, which is known as the `city of heroes' for the important role it played in Independence and Revolutionary struggles. Santiago rivals Havana in literature, music and politics and is rich in traditions, folklore and legends making almost every street corner in the city famous.
Take a tour of Santiago de Cuba, visiting the Santa Ifigenia Cemetery, where Fidel Castro is buried, Revolution Square, El Morro Castle and Moncada Barracks - where the opening shots of the revolution were fired on 26 July 1953, when Castro and his men attacked the barracks. The afternoon is free for you to explore the city on your own.

Day 8: Sierra Maestra National Park
Leaving the city behind, you drive towards the  green mountains of the Sierra Maestra, stopping to visit El Cobre, the most sacred pilgrimage site in Cuba. Our first choice is to stay in a hotel in the Sierra Maestra, however due the popularity of the area we may stay in Bayamo again.

Day 9: Castro's hideout and Camaguey
Walk in Castro's footsteps in the Gran Parque Nacional Sierra Maestra, a spectacular national park within Cuba's highest mountain range. This region is well known as Fidel Castro's operations base during the Cuban Revolutionary War. High in the Sierra Maestra lies the Comandancia La Plata, the secret mountain hideout of Castro and Che Guevara. This hiding place was used to plan the revolutionary war in the 1950's and as the base of Radio Rebelde which provided information for the revolutionaries. Hike to the revolutionary base and if you have time, bathe in the Yara River. Then continue to Camaguey.

Day 10: Camaguey and Trinidad
This morning there will be time to explore the historic city of Camaguey, characterised more recently by 'tinajones' - large, earthen jugs found in the squares, churches and gardens that were originally used to store water during drought periods. You then continue e to Trinidad, a UNESCO World Heritage Site since 1988, and perhaps the best-preserved colonial town on the island. Exploring Trinidad is like stepping back in time, the cobbled streets and horse drawn transportation whisks you back to colonial times. There are many interesting museums housed in old colonial buildings to visit in the daytime, but it's as the sun sets when Trinidad really comes alive. This evening we recommend a visit to Casa de la Trova for traditional Cuban music and dancing!

Day 11: Trinidad
Today is free to continue your exploration of Trinidad and its surroundings or simply relax by the hotel pool. For those who wish to venture a little further afield an optional catamaran trip is available. Embarking from the beach at Playa Ancon, the full day trip heads out into the Caribbean Sea to the small islands of Cayo Macho or Cayo Blanco (depending on availability) where you'll have a fresh seafood lunch amongst tame iguanas and other residents.

Day 12: Cienfuegos
After breakfast, you set off for 'El Cubano' Nature Park, a reserve nestled in the countryside on the outskirts of Trinidad. Walk through tropical forests to reach a waterfall where you can stop to take a refreshing dip. Continue to colonial Cienfuegos where you have a city tour of the main plazas and spend the night.

Day 13: Visit Bay of Pigs to Havana
Today, you visit the Bay of Pigs and drive through the Zapata Peninsula back to Havana. The Bay of Pigs was the site of the US invasion in 1961. You visit the museum at Playa Giron and stop for lunch and to swim at Caleta Buena, a protected cove that is great for snorkelling. On arrival in Havana make a stop at Revolution Square before checking into your hotel.

Day 14: Free day in Havana or optional day trip to Vinales Valley
Today is free for you to explore Havana or take an optional day trip to Vinales. The Vinales Valley is filled with palm trees and tobacco farms, traditional farming methods are still used amid some of the most impressive scenery in Cuba. Huge limestone karsts (sheer-sided, flat-topped hills) rise from the valley floor, riddled with caves and covered in forest. In the evening there is an optional trip to the famous Tropicana Nightclub in Havana.

Day 15: Havana
This morning, you'll have more time to explore bustling old Havana, Cuba's capital and the largest city in the Caribbean, with your guide. Old Havana is often described as a living museum with its marvellous monuments, cathedrals and palaces. It's the finest surviving Spanish colonial complex in the Americas, preserved by a combination of minimal war damage, post revolution restoration work and the millions of dollars invested since it was declared a UNESCO World Heritage Site in 1982. We'll also take time to have a Mojito cocktail and lunch (included) around Havana.

Extend your time in Cuba by travelling just a few hours from Havana to the idyllic island of Cayo Levisa. Stay in an en suite beach cabin and wake up each day to a beautiful 4km stretch of golden sand beach and inviting turquoise waters. There are no roads or other buildings on the small island just off the Northwest coast of Cuba, only the hotel and its bar and restaurant. All meals are included and for those who don't just want to relax in the sun, there are plenty water sports such as snorkelling and diving. Extensions can be arranged for any length of stay, and include transfers to and from Havana. Prices available on request. 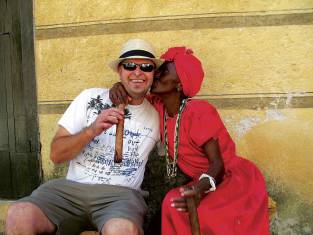 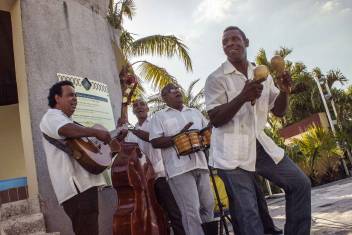 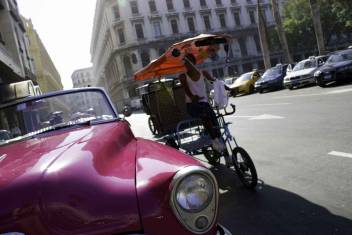