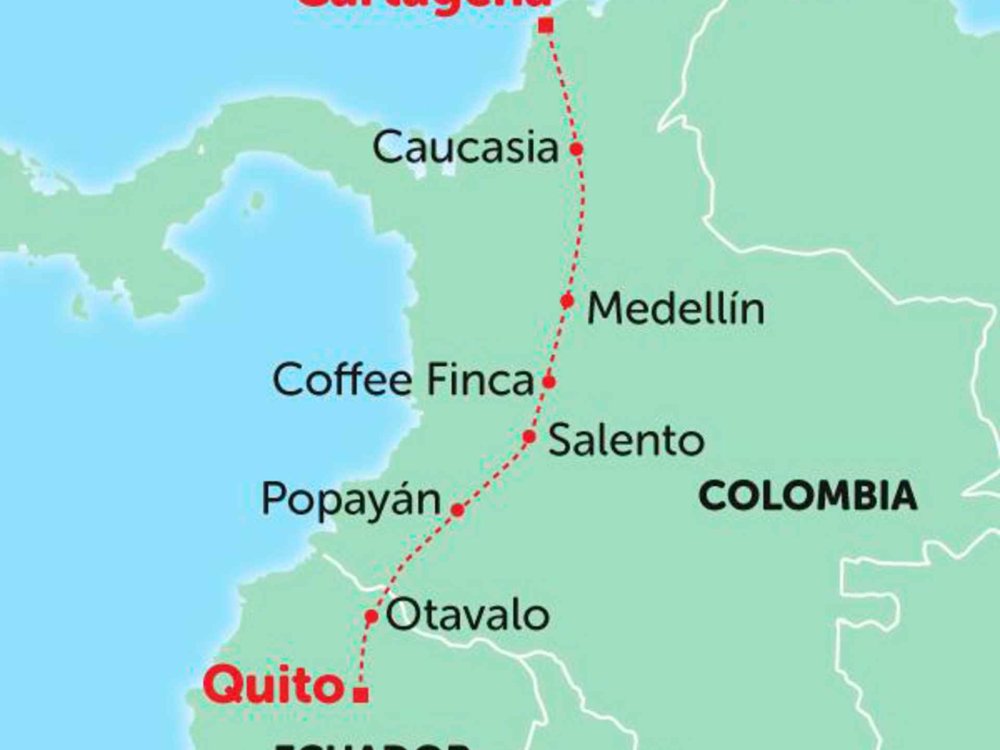 Bitte beachte, dass sich die Preise/Aktivitäten jederzeit ändern können.
Day 1 to 2 - Arrive Cartagena
The first day of your tour is simply an arrival day with no pre-organised activities. In order to allow time to relax and see some of the sights you may wish to add pre-tour accommodation.

Welcome to Colombia! Start the adventure in the lively city of Cartagena. The pull of the warm coastal climate and the pulsating rhythm of salsa have drawn well-heeled travellers to this spot for many years. Soak in the atmosphere in one of Cartegena’s open air cafés or head to the Café del Mar bar sitting on the historic walls. It's a perfect place to sip a cocktails and watch the sun go down.

Cartagena is a good place for walking and exploring the historic walled district feels like you have stepped back in time with 300-year-old colonial buildings, cobbled alleys, massive churches and bougainvillea-draped balconies. The extensive fortifications of this walled city were declared a UNESCO World Heritage Site in 1984 and it’s easy to get swept away in the enigmatic character of this old military seaport.

Outside the city walls, the Fort of San Filipe de Barajas is considered an impressive engineering feat of Spain’s military in South America. You can explore the tunnels and underground galleries or enjoy the views of Cartagena from its walls. Near Cartagena is the Volcán de Lodo El Totumo, a mud volcano where you can relax and wallow in the mud, which is believed to be a good treatment for the skin.

Accommodation:
1 night in a guesthose at Hotel Villa Colonial or similar.

Day 2 - Caucasia
Leaving Cartagena we board our overland truck travelling to the region of Caucasia. Here we will camp for the night enjoying our first dinner made by the group.

Day 3 to 5 - Medellín
Our next destination is Medellín, the second largest city in Colombia. The city is known as 'the City of Eternal Spring' due to its pleasant climate. View Medellín from its cable car network and enjoy the many bars and restaurants that make the city so lively.

Formally a city dominated by Pablo Escobar, it transformed into a cultural hub with plenty of art, museums and an abundance of parks. We will spend three nights here and in that time you have the option to visit the colourful and picturesque town of Guatape. Here you can see the famous El Peñon, the 200m rock that surrounds the town.

Accommodation:
3 night(s) in hostels at Hostal Lleras Calle 8 or similar.

Day 6 to 7 - Coffee Farm
The next two nights are spent on a coffee farm. Here you can enjoy a tour of the plantation, learning about the coffee growing process that is one of Colombia's biggest exports. Sample different blends and relax at this traditional hacienda.

Included Excursions:
Overnight and tour of a coffee farm

Day 8 to 9 - Salento
These emerald-green, terraced slopes are where almost half the country’s coffee is produced. The combination of lush hills framed by snow-capped peaks is an intoxicating brew making this is great location to explore by foot. Discover misty cloud forest, towering palm tree groves and pre-Colombian ruins while keeping an eye out for orchids and heliconias as well as a variety of fauna that calls the valley home including native deer, eagles and puma.

Our base Salento is in the heart of coffee country and is one of the region’s earliest settlements. The town’s isolated paisa community keep a very similar lifestyle to the journeymen that arrived in the mid-1800s, still speaking a particular style of Spanish and can often be seen clad in cowboy hats and traditional Colombian ponchos. The town is charming and the views from the main plaza are breath-taking. From Salento your tour leader will take you on a trek through the Cocora Valley. Marvel at the wax palms that scatter the landscape. These are the largest palms in the world and iconic to the region.

Day 10 - Popayán
Exuding old-world colonial charm and elegance, Popayán is often referred to as the ‘white city’ due to its chalk-white façades adorned with columns, domes and archways. Popayán has one of the best preserved colonial town centres in all of Latin America and you can wander its tranquil streets discovering its mansions, churches, schools and monasteries, with the snow-capped Puracé volcano visible in the distance.

Accommodation:
1 night in a hostel at Hostal Trail or similar.

Day 11 - En route
In order to break up the long travel days we will camp overnight on the way to Ecuador.

Day 12 - Otavalo
Before we say goodbye to Colombia, we visit Las Lajas Sanctuary. It is a spectacular sight, built inside a canyon and connected with a 50 meter tall bridge. It has been said that an apparition of the Virgin was said to be seen here in the 18th century. Today many still make the pilgrimage in the hope of receiving miracles and many plaques in the rock testify to some of the miracles meant to have occurred here. We continue our journey into Ecuador where we stay in the market town of Otavalo.

Accommodation:
1 night in a hostel at Hotel Los Ponchos Inn or similar.

Day 13 - Quito
Quito, Ecuador is the second-highest capital city in the world at 2,850 metres above sea level. It was founded in 1534 by the Spanish prior to which it was an Inca stronghold. It is situated in a hollow at the base of the live volcano Pichincha and the whole length of the city can be seen from atop Panecillo hill where the enormous statue of the Virgin of Quito stands. The city has two main sections, the old and the new city. The latter is the main commercial area and has all the good restaurants and bars, whereas the old city is the colonial sector with steep calles, busy plazas and local markets.

UNESCO has listed Quito as having the largest best-preserved, and least-altered historic centre in Latin America. Along with Krakow, Quito was the first city inscribed onto the UNESCO World Heritage list in 1978. Some churches you might like to visit are the Cathedral of Quito, Church of the Society of Jesus (La Compañía), Church and Convent of St. Francis (San Francisco) and Basílica del Voto Nacional.

Accommodation:
1 night in a hotel at Majestic Hotel or similar.

Day 14 - Depart Quito
Your adventure of a lifetime comes to an end today. If you have a late flight or have lengthened your stay by adding post tour accommodation you will have more time to explore the sights. 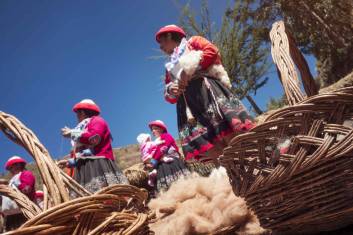 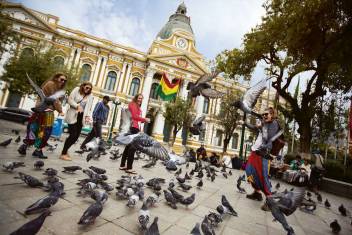 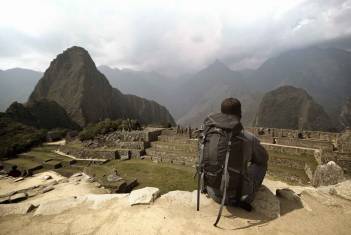 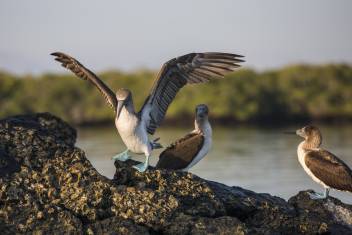 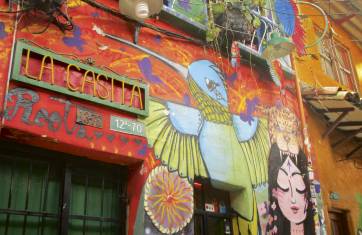