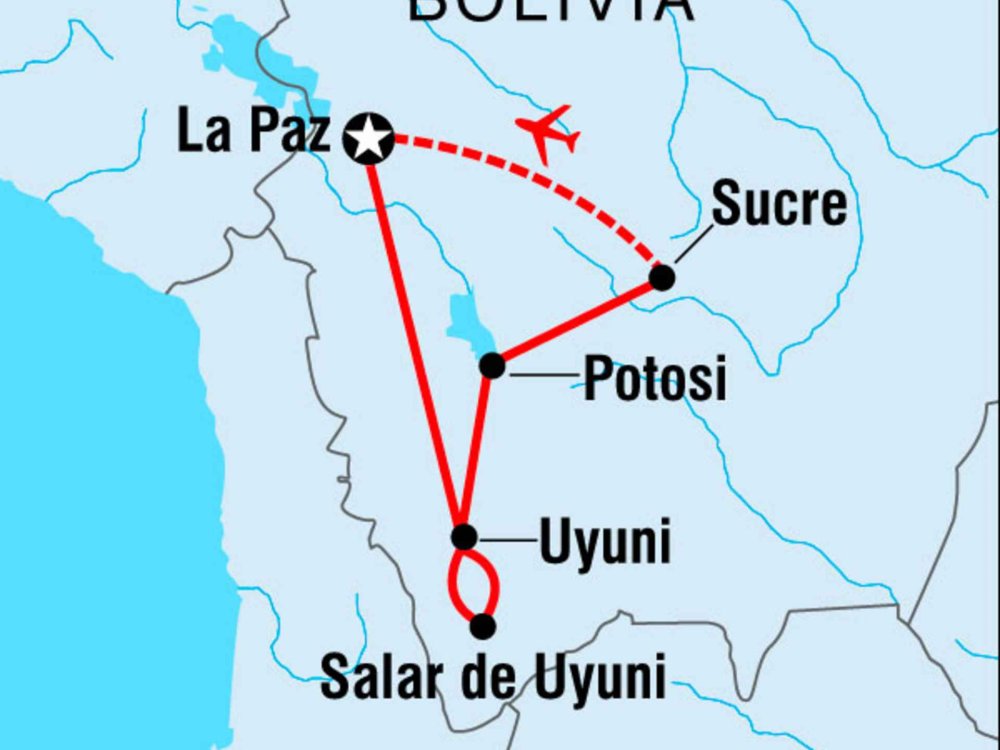 Kamisaki! At around 3600 metres, you’ll feel like you’re on top of the world in La Paz. Although Sucre is the official capital of Bolivia, La Paz is the centre of industry – the country’s brain. Despite the abundance of colonial architecture, La Paz's indigenous roots run deep, and the atmosphere in the market-filled streets is both modern and traditional. After a 2pm welcome meeting, enjoy an orientation walk with your leader and get to know the winding streets and pokey alleys. After the meeting, maybe head out into the city, situated in the middle of a vast volcanic crater. Breathe the ‘thin’ air, marvel at the vistas of buildings clinging to the canyonsides, and explore the lively streets like Calle Jaen.

Death Road Biking To Coroico - Please note that our leaders are not able to organize this activity for you due to safety concerns. Injuries are very common and there have been a number of fatal accidents.

Today you’re free to explore the neighbourhoods and alleyways of La Paz or, alternatively, venture out of the city in search of crisp mountain air. Perhaps hop on a local bus out to the extraordinary landscape of Moon Valley. A maze of canyons and colossal clay spires, these rugged oddities make for staggering views. If you’d prefer to see some man-made oddities, why not take a cable car to the Mercado de Hechiceria – the renowned Witches’ Market. Though we can’t guarantee the potions, incantations and voodoo dolls will work their magic, the experience is reliably fantastic. Tonight, you’ll take an overnight bus to Uyuni, best known for its proximity to the Bolivian salt flats known locally as the Salar de Uyuni. Sit back and relax, and you’ll be in the middle of Bolivia in no time!

Arriving in Uyuni feels a bit like you've reached the end of the road, which in many ways is true. This remote small town sits on the edge of the high altiplano, a wilderness that extends for hundreds of kilometres towards the border with Argentina and Chile. So, it's hardly surprising that the town has a bit of a wild west feel about it. Uyuni is the starting point of your three-day 4WD excursion into Salar de Uyuni and the Andean desert. This morning you will stop by the Train Cemetery, three kilometres outside of Uyuni Town, connected to it by the old train tracks, and see where families of abandoned locomotives rust slowly in the sun. The remainder of the day is spent mostly on the salt lake itself. Heaving with around ten billion tonnes of salt, Salar de Uyuni is the world’s largest salt plain. Endless blue skies meet endless white plains, and it's a pretty hypnotic sight – don't forget to snap loads of photos! Continue to trip through this mindboggling locale, reaching an island of cacti in its centre that rises like a jagged reef in the desert. Known as Inca Wasi, or Fish Island, this fossil-strewn outcrop was once the top of an ancient volcano.
Afterwards, you will arrive at your accommodation at around 6.30 pm. Settle in and enjoy an included dinner.

Visit Laguna Colorado and Laguna Verde, lakes where algae and minerals have turned the waters a vivid red and green. One of the strangest sights in such arid and inhospitable land is the abundant wildlife, It's truly a photographer’s paradise. Look out for llamas, flamingos, vicunas, and foxes. Despite all the delights, this trip can be tough going. There will be long travel days in 4WDs on dusty washboard tracks, freezing temperatures, basic toilet facilities and multi-share accommodation. However, without a doubt, this amazing journey will be one of the main highlights of your trip to South America.

Accommodation in the desert is very basic. Shower facilities if any can be unreliable and cold, as the pipes often freeze in the winter months. Toilet facilities are simple, and the multi-share accommodation is dormitory style. Electricity is generated by solar panels and generators, so there won’t be enough power to charge electronic devices. The Desert is at high altitude and can experience extremely cold weather, particularly at night, so it’s important to pack warm clothing and base layers.

Special Information: Please be aware that from December to March, there’s a risk of the salt lake being flooded. If this is the case, the itinerary will be adapted to accommodate this.

Today, say goodbye to the salt flats, and catch a local bus for about 4 hours along the scenic route to Potosi, where you’ll arrive in the early afternoon. Potosi has had a turbulent past, centred mostly around its mining successes and failures. Once the predominant supplier of silver to colonial-era Spain, Potosi briefly celebrated life as one of the richest cities in the world. Explore the architectural remnants of this period of industry on a leader-led orientation walk, then the afternoon and evening are yours. Perhaps visit the Santa Teresa Convent Museum to observe the art and treasures on display inside the convent’s original walls or the National Mint Museum.

Special Information: Visiting the Potosi Mines can be a thrilling yet a dangerous experience. We at Intrepid have partnered with a local operator to offer travellers what we have assessed to be a safer and rewarding option for this visit. This tour involves visiting the miner’s market, a minerals distillery as well as entering the first 150-200 meters into the Grito de Piedra mine. We believe this experience offers a great understanding of the socio, cultural and economic importance of the mine to Potosi and the region while avoiding the risks associated with entering deeper sections of the mine. This activity is not for the faint hearted or those that suffer claustrophobia. Your group leader is strictly prohibited from recommending or assisting travellers to book other mine tours.

After a lazy morning to explore Potosi, take a local bus early in the afternoon and arrive in Sucre after approximately 4 hours, disembarking in the temperate valley city. Bolivia's official capital, Sucre was declared a UNESCO World Heritage site in 1991 and has retained the flavour of its colonial heritage in its churches, museums and ancient mansions. Most of the town's colonial buildings have been whitewashed, earning it the nickname the 'White City'. On arrival, you'll have some free time to get your bearings of the city before you go for an optional dinner.

Take a few days to explore Bolivia’s capital. After an orientation walk, compare shoe sizes with a dinosaur at Cal Orcko, where 68 million-year-old footprints have been discovered. This is the largest collection of dinosaur footprints in the world, over 12,000 of them! Then, you might like to visit the Museo de la Recoleta, a 400-year-old convent on top of the hill that provides great views over the city and is home to a fascinating collection of sculptures and paintings. Or maybe head to the Plaza 25 de Mayo to rub shoulders with Sucre's affluent residents and investigate the extravagant interior of the Senora de la Merced.

Today, set out for an included hike along the ancient Pre-Incan path known as the Chataquila trek. The trek is relatively easy being that it is mostly downhill. On the way down enjoy the stunning views of the Andes and the valleys. In the afternoon, perhaps head up to Recoleta, an old convent on top of the hill, giving some great views of the city. Adrenaline junkies might also like to take to the surrounding peaks for some excellent mountain biking options or perhaps give hang gliding a shot. Most of today and tomorrow are free to take up some additional optional activities in and around town, so it’s up to you what you’d like to do and see! Bolivian dance show, or textile museum, anyone?

This morning is free to explore Sucre before catching a flight back to La Paz.

Special Information: Departure Tax – Please note you will be required to pay an airport departure tax, for the flight today which is approximately BOB 11.

Today is the final day of your tour and there are no activities planned, so you are free to leave at any time. With so much to see and do, you might want to spend an extra day or two checking out the city. We’ll be happy to organise additional accommodation for you (subject to availability). 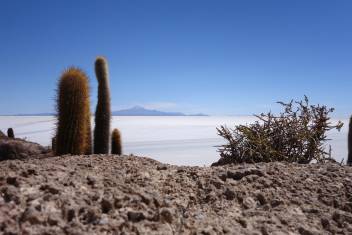 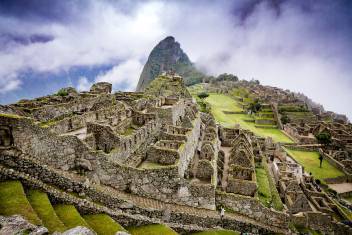 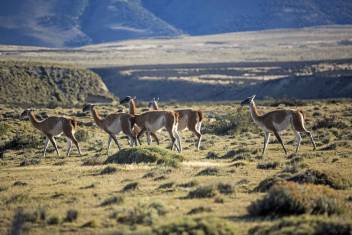 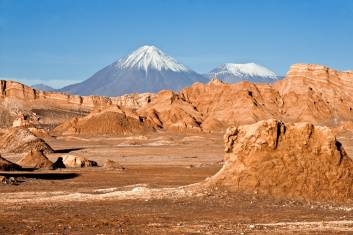