I just came back from a Cape Town to Vic Falls Camping Tour with Ricardo, Justice and Buddy (20.8. - 8.9.). Im not sure if I handed in my feedback form, so in case I actually left it at the last campsite, I wanted to make sure you know what a great team we had!

Ricardo's cooking was incredible! He worked so hard to 'treat' us and I was deeply impressed by his creativity and skill - especially since the freezer broke halfway through the tour. We never had the same food twice, he even considered individual tastes and we all enjoyed his meals a lot! What else? I asked him a million questions, he patiently answered them all. He was very good at reading people's moods and at making us laugh at the right time. His enthusiasm, especially for animals and nature, was infectious. He also was a lot of fun and we had a fantastic time together!

Justice's driving was perfect. We felt very secure and he knew exactly when and where to stop for a great picture ;) But he was much more then just the driver. He knows soooo much - especially about history and politics and the different cultures - and he has a great way to explain and engage people in discussions. Him I asked two million questions, he answered every single one of them. I felt like I learned new facts and was introduced to new ideas constantly. I'm so thankful he shared all his knowledge! Furthermore, he was very professional and always kept his calm. We also laughed a lot and had so much fun!

These two were responsible for an unforgettable holiday and an incredible adventure. We were all very emotional when we had to say goodbye because the group became so close. That's also in huge part due to the people skills of Ricardo and Justice.

So, this very special combination of guides was the best thing that could have happened to us - I thought you should know ;) 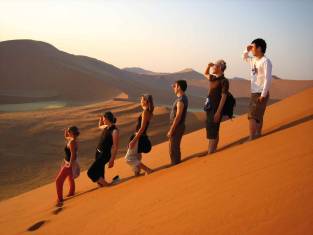