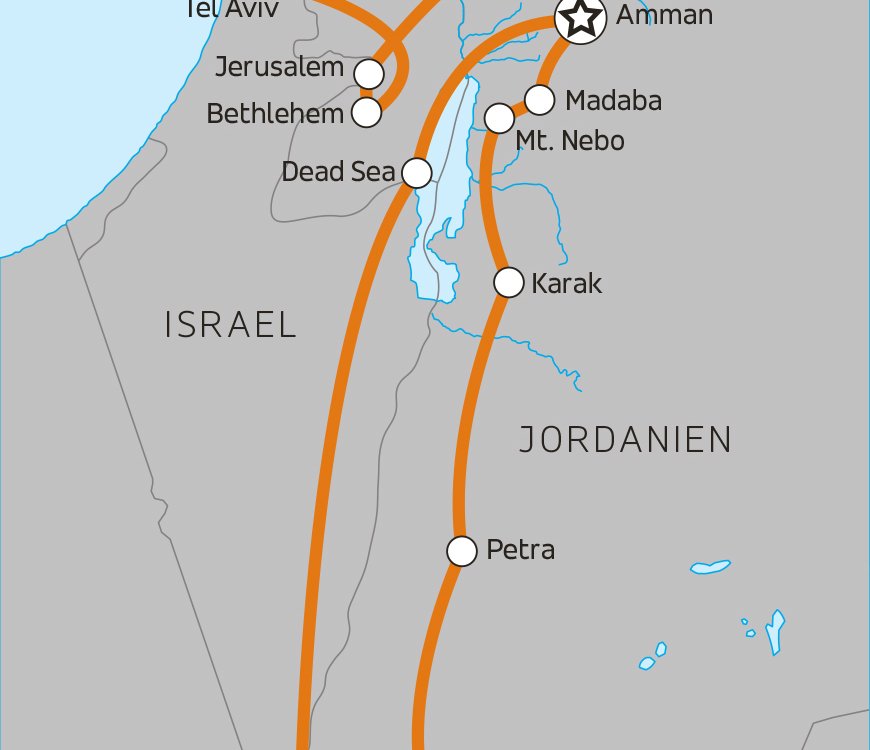 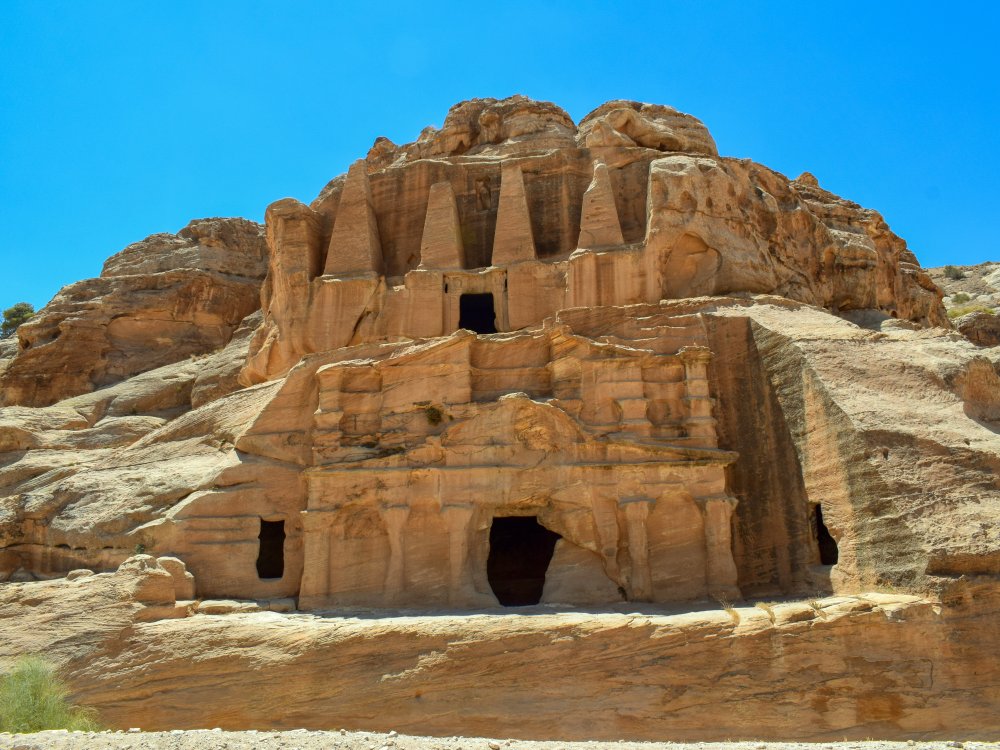 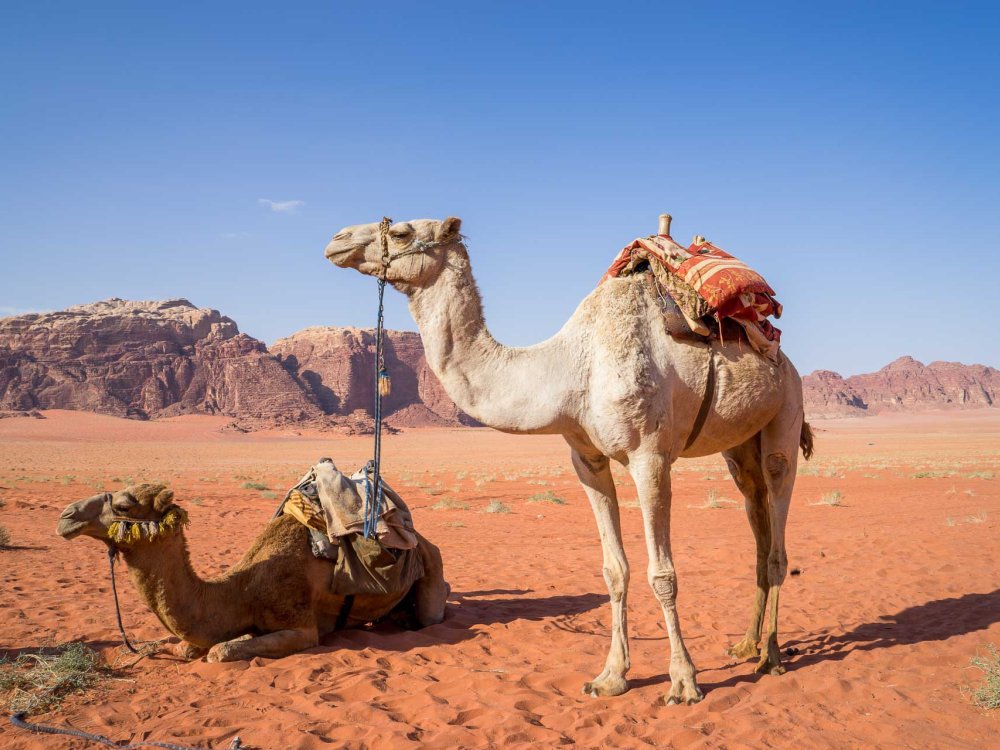 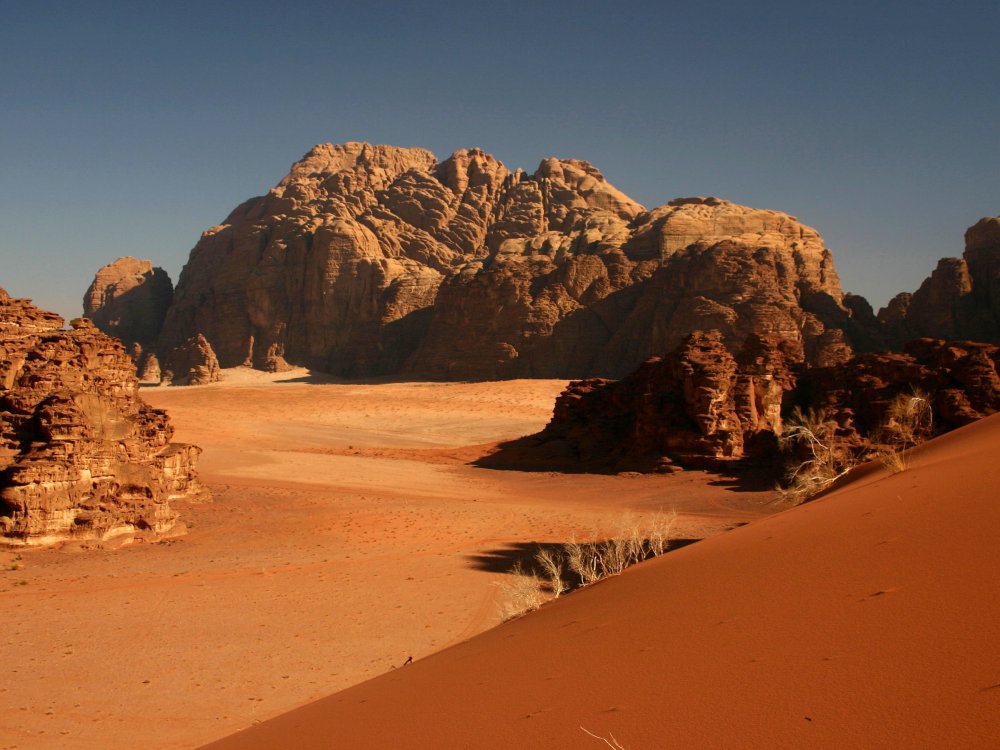 Transfer am Anreisetag in Amman inklusive

Touch down in one of the oldest cities in existence. Ready to experience the new and exotic? Thought so. Spot your Tour Guide at the airport (hint: they're holding a placard with your name on it). Dump your stuff at the hotel and meet your fellow travellers. We might be a mixed bunch but we're all in it together. Hungry? Gather the troops and head to Hashem Restaurant for the best dang falafel you've ever had. Period.

Rise and shine! We're off to the Lost City after breakfast. But it's not just about the destination - the road to Petra is gonna' be amazing. First? Madaba: the site of an ancient holy map that's so detailed it puts Google Maps to shame. Check out the vibrantly coloured and intricately detailed Byzantine-era mosaics scattered across the city before we take in allllll the views of the Promise Land from Mt Nebo. Seen Kingdom of Heaven? Channel your inner Orlando Bloom as we storm through the Crusader stronghold of Karak Castle. And to round it all up? Experience Petra - by night. Opt in to take a goosebump-inducing walk down the dark ravine, following the sound of traditional music and the soft glow of a candle-lit desert floor. Awesome is an understatement.

Words can't describe how breathtaking this place is, so why would we try? Spend the whole day uncovering the magic of the Lost City and learn why people have been drawn to this place since 312 BC. With towering burning-red cliff faces and a façade made famous by Indiana Jones - this place is a testament to man's ability to create beauty from absolutely nothing. Get your bearings on an orientation tour with our expert Trip Leader. Then: the rest of the day is yours to explore. Just be back in time for tonight's optional dinner - a delicious traditional meal of maqluba with a local family. This is as authentic as it gets.

Back in the day, camels were the go-to way to cross the desert. But they're uncomfortable and smell bad. Instead, we'll switch the coach for a 4x4 and venture across The Valley of the Moon to our traditional Bedouin Camp - in the heart of the Jordanian desert. If you want to see if Alice really does have two humps - there's an optional ride on offer today. Or just sit back and take it all in. This is your moment. Tonight's included dinner is brought to you by one of the world's most ancient nomadic tribes - tuck in around the camp fire and learn all about Bedouin life with your trip mates. We're spending the night under the best-looking night sky you've ever laid eyes on. Heck yes!

From a sea of burnt-red sand to well, the actual sea - we're making tracks to Jordan's only coastal city. A city that dates back to 4,000 BC - Aqaba's temps rarely drop below 20°C and is located smack bang in the middle of the Red Sea. Meaning? It's THE place for diving, snorkelling and Nemo-spotting. And you've got the whole afternoon to do just that. Scuba dive around sunken military tanks, transport planes and Lebanese freighters. Go snorkelling with colourful fish, a variety of corals and green turtles (maybe). Then, gather the gang for a shawarma (Jordanian kebab) and sunset on the beach. This is livin'.

Ready to tick "bob on top of the Dead Sea" off your bucket list? Today is your day. At 427m below sea level (the lowest point on Earth), the Dead Sea is so salty you can float weightlessly around like last night's second helping of shawarma didn't happen. Tip: avoid shaving your legs, face or other... parts too close to your swim. Sh*t stings! Give yourself a free spa treatment with the mineral-laden mud. Snap a pic for mum. And pile back on the coach - we're heading back to Amman for an education in the Roman, Byzantine AND Umayyad empires that have left their mark on this place. Check out the Roman Amphitheatre, Citadel and melting pot of ancient historical sites on a city tour before heading downtown with the gang for a falafel feed.

Crank the history knob to 11 with a visit to Jerash – home to a bunch of Greco-Roman highlights, including a hippodrome which was used for chariot racing (and has nothing to do with hippos). Then wave goodbye to Jordan as we cross the Allenby Bridge into Israel. Flash your passport and meet your local Israeli guide. We’re bunking down in the heart of Jerusalem tonight. Head out in search for Aricha Sabich – the best place for a delicious Israeli sabich. Or sit back and enjoy the view at our hostel’s outdoor roof terrace.

Christianity, Islam and Judaism all consider Jerusalem a holy place, so it's a big deal. Get educated on a guided tour of old town, checking out the likes of Via Dolorosa, Dome of the Rock, Gethsemane, King David’s Tomb, the Western Wall and Golgotha (where Jesus was crucified). Then: the rest is up to you. Need some suggestions? Take in all the I-N-C-R-E-D-I-B-L-E views from the Mount of Olives. Visit Jesus’s final resting place at the Church of the Holy Sepulchre (expect queues!). Then, check out Mahane Yehunda Market – a variety of local produce stores by day, buzzing bars and shisha stalls by night. You wanted free time to delve deeper – go get it!

The trip may be winding up – but the adventure isn’t over yet! We’re rolling on to the culturally rich city of Bethlehem to see the very spot Jesus was born (according to certain sources). Wander across Manger Square and check out the Church of Nativity with our Trip Leader, before heading over to Banksy’s Walled Off Hotel for the ‘worst view in the world’. Think: a hotel, museum, protest and art gallery all in one. Learn your ABC’s of Israeli wine with a quick stop at a local winery, before we arrive in Tel Aviv. Get your bearings around the chilled-out seaport of Old Jaffa – ticking off the Clock Tower and St Peter’s Church. Then: there’s a reason they call this place ‘Non-Stop City’ – time to gather the gang and find out why.

Down your pomegranate juice and brush away those tears – we’ll say our goodbyes after breakfast. Swap those Insta handles and pencil in next year’s reunion trip. Sticking around? Track down Abu Hassan for hummus that will haunt your dreams (it’s that good).